The EITC and the Extensive Margin: A Reappraisal

Since its creation in 1975, the Earned Income Tax Credit (EITC) has been one of the primary channels through which the U.S. government combats poverty and supports low-income families. Another important channel is the cash welfare system.

While traditional welfare has long been blamed for keeping families out of the workforce, the EITC is supposed to draw them in. The perception that it does so successfully has contributed to its elevation as the country’s largest cash benefit program. Following major reforms to traditional cash welfare programs in the 1990s, welfare enrollments drastically and consistently declined. EITC benefits, on the other hand, have been expanded at the federal and state level several times since the program’s inception. Today, EITC transfers to low-income Americans dwarf cash welfare by a factor of almost six.

Most researchers agree that the EITC has had sizable effects on employment, particularly for single mothers. But in this working paper (PDF), Princeton University’s Henrik Kleven finds strong evidence that the EITC’s effects on employment and the labor supply of single women with children are overblown. By comparing increases in the employment of single women with and without children (and of single women with different numbers of children), he shows that of all the federal and state reforms to the EITC since 1975, only the 1993 federal expansion was associated with employment increases. Though much of the existing research touting the employment effects of the EITC focuses on the 1993 reform, Kleven finds that the drastic employment increases observed in the mid-to-late 1990s were instead the result of welfare reform aided by a booming economy that made it easier or more beneficial to obtain formal work.

While these findings counter the bulk of previous research on the issue, it would of course be difficult to prove conclusively that employment increases in the mid-to-late 1990s were completely unrelated to the EITC expansion in 1993. It’s possible that the magnitude of the labor market changes in the 1990s may swamp any EITC-related pattern. However, given that his analysis comprehensively examines every EITC reform since 1975, Kleven finds it hard to conclude that the EITC has played any major role in incentivizing single mothers to re-enter the labor force.

How the EITC works

As its name suggests, the EITC is a tax credit available to low-income Americans who work and earn income. The amount you receive depends on how much income you earn, as well as whether you have children and how many. The maximum amount a single, childless person can receive is $519 per year as of 2018. The benefit is much more generous for families with children. The maximum annual credit for a single mother with three children equals about $6,400 and is reached at annual earnings in the range of $14,300 to $18,700. The credit is fully refundable, implying that you can receive it even if you don’t make enough money to be required to pay income taxes.

Since the EITC was introduced, there have been four additional expansions at the federal level—in 1986, 1990, 1993 and 2009. Further, 29 states have introduced their own EITC supplements. Of all these reforms, the most significant changes occurred during the 1975 EITC introduction for all families with children and the 1993 EITC expansion for families with two or more children.

It is illuminating to consider the long-run evolution in the labor supply of single women. Figure 3 shows the time series of labor force participation rates for single women with and without children over a 50-year period. We see that labor force participation has evolved in parallel for these two groups over the last fifty years, with the exception of the mid-to-late 1990s. The participation rate for those with children was about 14 percentage points lower than for those without children in the late 1960s. This gap was about the same 25 years later, in the early 1990s. Then single mothers closed the entire gap in about five years, after which the two groups returned to parallel trends. 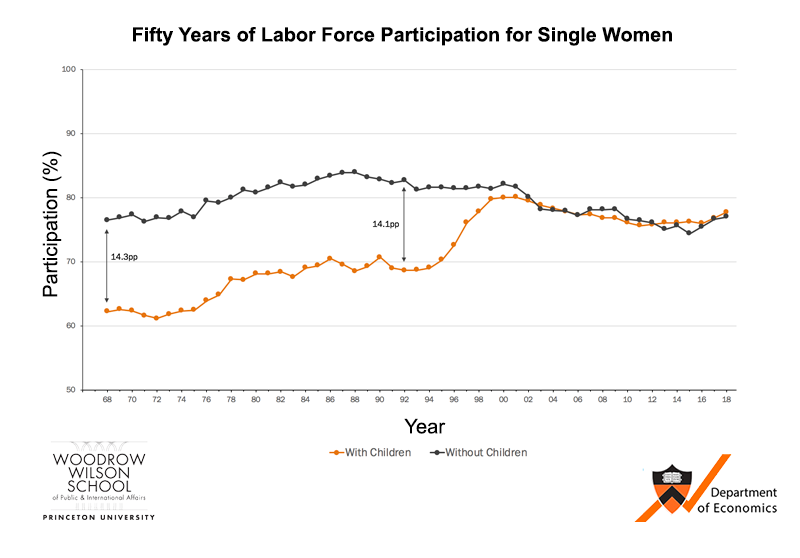 The dramatic increase for single mothers followed the 1993 EITC expansion, but the long-run series highlight that this period was an anomaly. If the EITC was an important motivator for the return of single women to the labor force in the 1990s, then why did it not narrow the gap in other time periods?

Kleven outline several reasons why the increases in employment in the mid-to-late 1990s were not the result of the 1993 EITC expansion, but instead the result of welfare reform aided by the strong economy. His arguments can be broken down as follows:

Taken together, these analyses suggest that the dramatic employment increases in the 1990s were driven by welfare reform and aided by a favorable business cycle. In fact, when Kleven merges all of the EITC reforms at the state and federal level in a stacked event study framework, he finds that the effect on employment is a precisely estimated zero.

What explains the limited effect on employment of the EITC?

Why has the EITC had such a small effect on employment of single mothers? One explanation could be that tax refunds generally have limited ability to incentivize those who are not working to find work.

Another explanation, specific to the EITC, is that that the credit is not well-known or well-understood among potential recipients, and there is a considerable evidence that this is the case. A number of studies have documented that most potential recipients are either unaware of the EITC or have a limited understanding of the schedule and eligibility requirements. Past studies have argued that a lack of information can explain why the EITC doesn’t incentivize those who already have jobs to work more (i.e. it doesn’t explain the “intensive margin response”). Kleven argues that these informational frictions are equally important for the extensive margin of labor supply.

Importantly, these findings don’t necessarily imply that the EITC is a bad policy. If we accept that the EITC has no effect on work, then we can consider it a non-distortionary transfer to the working poor. Whether such a policy is desirable depends on a policymaker’s goals and how the credit is financed. If policymakers fund the EITC with a lump-sum tax on all workers, then the policy can be seen as a net subsidy to the working poor at the expense of higher-income workers, which would reduce inequality. On the other hand, if transfers to the working poor are financed by scaling back welfare benefits to the poorest segments of society (as one could argue was the case in the 1990s), then the EITC expansions would be inequality-increasing.

Leaving aside these considerations about optimal policy design, the political argument for the EITC has relied heavily on its supposed success in increasing labor supply and employment. The empirical findings presented here do not support that argument.