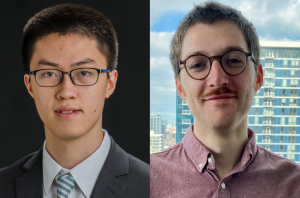 The Dixit Prize is awarded annually to an outstanding Princeton Ph.D. student or students who have completed with great distinction their general examinations in international trade or international macroeconomics, and who have written an outstanding “third-year paper” in one of these fields. Zhou was recognized in part for his third-year paper, “Open Economy, Redistribution, and the Aggregate Impact of External Shocks.” Lhuillier’s paper was titled “The Spatial Job Ladder.”

The prize is named in honor of Avinash Dixit, the John J.F. Sherrerd ’52 Professor of Economics, Emeritus at Princeton. During his distinguished tenure at Princeton, Avinash taught trade at the graduate and undergraduate levels, as well as in the Princeton School of Public and International Affairs.

Winners of the Dixit Prize in 2020 were Juan Manuel Castro Vincenzi and Benny Kleinman. More information about the Dixit Prize, including a complete list of past awardees is available here.

Many congratulations to this year’s winners. The Economics Department and the International Economics Section look forward to following their academic achievements for years to come.