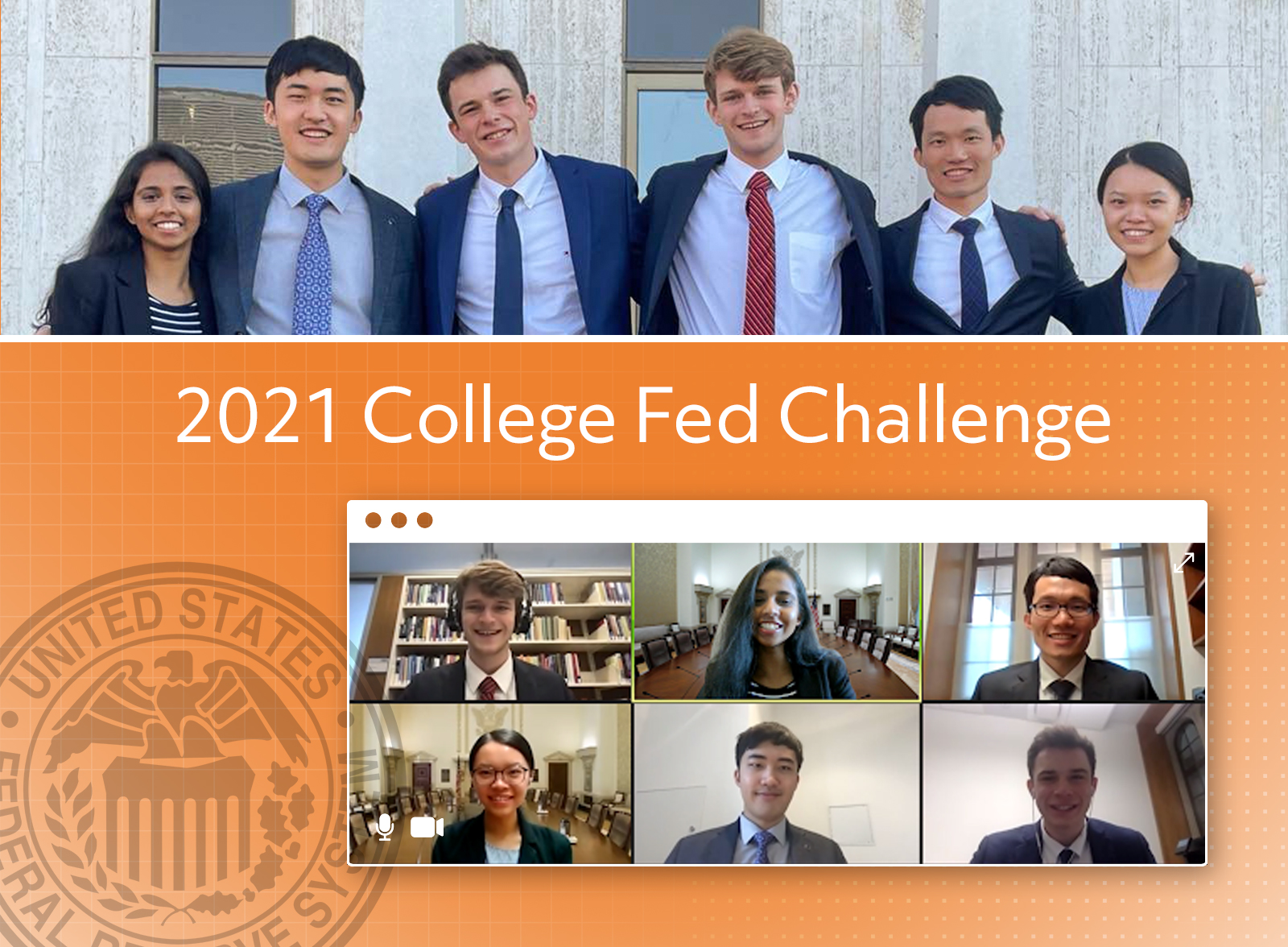 When the six students from this year’s Federal Reserve College Challenge competition team graduate from Princeton, they’ll have checked a box not many undergraduates have: They joined a Zoom call with Federal Reserve Chair Jerome Powell.

All together 27 Princeton undergraduates participated in this year’s challenge, preparing material that the six members of the competition team presented to the Federal Reserve staff.

“I learned a lot throughout the process,” said Noah Harrigan. “I knew what the Fed did in a broad sense, but the university gave us so many great resources to help us learn in detail about how the Fed works.”

Those resources included mentorship from former Fed policymakers themselves, with Alan Blinder, Gordon S. Rentschler Memorial Professor of Economics and Public Affairs and founder of the Griswold Center for Economic Policy Studies, and Bill Dudley, Griswold Center senior research scholar, serving as the team’s advisers. Blinder was vice chair of Board of Governors of the Federal Reserve System, 1994-96; Dudley was president of the Federal Reserve Bank of New York, 2009-18.

“This was a fine team that worked very hard, learned a huge amount, and made an excellent presentation,” said Blinder. “We are proud of them.”

“A great group of students, who spent the time and effort to really understand the intricacies of monetary policy—from my perspective, time exceedingly well spent,” said Dudley.

Leland Domaratzky, who along with Shivani Prusty served as co-captain of the 2021 Princeton team, said the opportunity to work with Blinder and Dudley was a privilege the team was honored to have, and “something that would only happen at Princeton.”

“We’re really thankful to both of them for their time and everything they taught us.”

This year, 74 university and college teams registered for the challenge in one of twelve regions that align with the Federal Reserve System’s regional banks. In the first phase of the challenge, students compiled a literature review and assessment of current economic conditions. Teams uploaded their video presentations and participated in virtual Q&As, with Federal Reserve staff serving as competition judges.

The top 18 teams from round one, including the Princeton team, continued to the semi-finals in round two—a mock Federal Open Market Committee (FOMC) meeting where students play FOMC committee members and present monetary policy recommendations for pursuing the Fed’s policy goals in light of current, real-world economic conditions.

With the economy still rebounding from an unprecedented global crisis, this was no easy task for the 2021 teams. And though preparation for the challenge takes weeks, the students ultimately had to condense their learnings and recommendations into single 15-minute presentations. 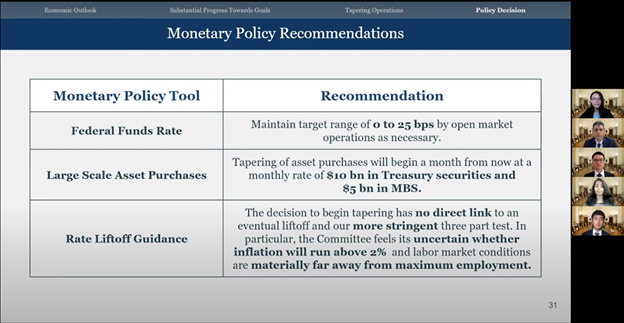 “There’s so much data and debate going on in the contemporary macroeconomic realm,” said Shivani Prusty. “The most challenging part of the competition is determining what’s most important and condensing all that information into a 15-minute presentation that distinguishes our recommendations from those of other teams.”

“Trying to cover all the nuances of different debates is difficult, but that’s also one of the most interesting and important parts of the process,” said Allen Liu.

In their presentation, this year’s Princeton team shared a detailed summary of economic conditions that took into account how the Delta variant has affected the economic recovery. For their final policy recommendations, they argued that current and expected conditions did not yet warrant an increase in the federal funds rate and recommended that “tapering”–a term that in the current context refers to the Fed rolling back support provided during the pandemic by reducing the amount of assets it purchases each month–begin in mid-2022.

Where the classroom meets the real world

Ultimately, the annual challenge helps students see how what they learn in the classroom is applied in the real world—an opportunity the 2021 team was thrilled to have.

“As students, we’re used to absorbing a lot of information, but not always forming an opinion around it,” said Shirley Ren. “The challenge was an important exercise in forming a conclusion, even though we might not always be right. Interestingly, in between our presentation and the Q&A, some of our opinions changed based on new labor market and inflation data that came out.”

“I think central banking is one of the highest callings,” said Justin Ong. “After participating in the challenge, I can say it’s a path I might one day pursue.”