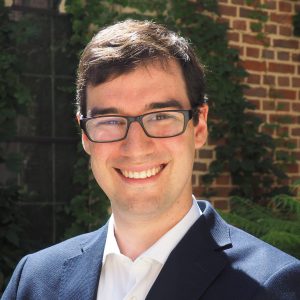 “John is a brilliant applied macroeconomist, and we are so delighted he chose to join us at Princeton,” said Professor Gianluca Violante.

“His broad research agenda on income inequality, innovation, taxation, and wage-setting is fresh and highly policy-relevant and will further deepen the expertise of the department’s macro labor group.”

Understanding what kinds of policies help—and which ones hurt

As a researcher, Grigsby is interested in growth and innovation, and “thinking about what kinds of policies foster innovation and which ones hurt it.”

In “Taxation and Innovation in the 20th Century,” recently published in the Quarterly Journal of Economics, Grigsby and his-coauthors find that taxes have a strong negative effect on innovation. If taxes increase in one state, activity moves to another.

“That doesn’t mean tax rates should be zero,” he says. “Taxes finance education and other public investments that support future innovators. But the finding does suggest that tax policy may affect long-run growth, which is a cost worth considering in policy discussions.”

Grigsby’s research also examines questions about wages and the labor market. In his dissertation, “Skill Heterogeneity and Aggregate Labor Market Dynamics,” Grigsby builds a model that illustrates how different shocks play out across industries to affect workers with different skill profiles, and argues that these differential industry shocks were a major reason why aggregate wages did not fall in the Great Recession. Meanwhile, in “Aggregate Nominal Wage Adjustments: New Evidence from Administrative Payroll Data,” recently published in the American Economic Review, Grigsby examines how individual wages respond to the business cycle to provide an empirical basis for “wage rigidity,” a key ingredient in New Keynesian macroeconomic theory.

In addition to joining the macro labor group at Princeton, Grigsby said he’s excited to meet his students and return to in-person teaching and advising.

“I’m really excited to go back into an environment where I can have an open door and the opportunity to interact with everyone,” he said, noting his particular enthusiasm for working with current and incoming Ph.D. students on their research questions.

“The Economics Department at Princeton has a culture of ‘approach-first’—that the rigor of the work is what matters most,” Grigsby said. “That culture is what drew me to Princeton.”

Grigsby said teaching is what first motivated him to pursue a Ph.D. As an undergraduate, he valued his relationships with faculty mentors, and those relationships inspired him to work in academia.

“On a fundamental level, the job of an academic is to be a teacher. Yes, you’re tasked with developing ideas, but you have to communicate them as well.”

Before beginning his path in academia, however, Grigsby wanted some real-world work experience. In 2012, he started as a research analyst with the New York Federal Reserve—a job he says solidified his desire to study economics.

“At the Fed, you get to conduct policy-relevant research and work alongside people who are aiming, through their work, to make the world a better place. I saw how economics, as a discipline, can have real impact. I really gravitated to that idea.”

After two years at the New York Fed, Grigsby earned his Ph.D. from the University of Chicago. He then completed a post-doc at Northwestern before beginning his appointment at Princeton.

Students or faculty planning to stop by Grigsby’s office might like to know he is an avid follower of the English Premier League, and that if he wasn’t an economist, he’d like to do data analytics for soccer teams.

While the world of professional soccer would have no doubt benefited from his skills, the department is pleased he chose to pursue economics instead. We look forward to seeing him around campus for many semesters to come.