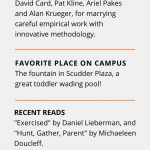 As an undergraduate student, Michal Kolesár was drawn to the study of economics because he loved seeing abstract mathematical concepts come to life.

“Who would have thought that knowing how to invert matrices is essential to understanding why female labor force participation increased post-WW2?”

Today, as an econometrician at Princeton, Kolesár develops new tools and statistical methods that economists use in their work and teaches students how important it is to master these essential concepts.

“One thing about teaching econometrics that I find very gratifying is when students come back a year later and mention how useful the material is for their junior independent work, senior thesis, or dissertation,” says Kolesár.

“Econometrics is a tool, and you first need to learn how to work with it–you need practice and patience at first, and it can be hard to understand why we’re spending time on some seemingly pointless drills. The reward comes later, when we use the tool to answer particular questions and build new knowledge. I love seeing students get to that second stage.”

Accounting for bias in statistical inference

A major theme of Kolesár’s recent work is how economists can better account for bias when conducting statistical inference–that is, studies that make predictions about a population. When building a model for statistical inference, researchers often encounter a “bias-variance tradeoff.”

“The bias-variance tradeoff is a classic tradeoff that arises in numerous settings in econometrics,” Kolesár says. “We may be okay with not aiming at exactly the middle of the target if it means that our shots are more precise and less erratic. For instance, we may estimate a more restrictive model, because if we try to estimate a bigger, more plausible model, our estimates are too erratic and sensitive.”

While many modern machine learning methods and other tools in economics attempt to carefully calibrate this tradeoff, statistical inference methodologies often ignore bias or assume that the effect of any bias is negligible.

Kolesár’s work corrects for this by developing new “bias-aware” methods that are more explicit in accounting for bias–and therefore more transparent and reliable.

In “Contamination Bias in Linear Regressions,” Kolesár takes a closer look at the commonly-accepted principle that, in studies using linear regression models, the fact different people respond differently to the treatment doesn’t affect the reliability of the results. This is true, Kolesár says, when estimating the effect of a single treatment using linear regression.

But when multiple treatments are used, he shows, the principle no longer applies.

“Once there is more than one treatment, estimates of the effects of a given treatment are contaminated by the effects of the other treatments,” he says. “The robustness result doesn’t  translate to a setting with multiple treatments when we also need to control for observable differences between units.”

Research to satisfy your own curiosity

“Plus, for an econometrician, there is always a wealth of research ideas in their work!”

As a professor and advisor, however, he tells students that the key to success is finding internal satisfaction in the process.

“Many young researchers think that the goal of research is to write and publish papers. But this is not always a helpful attitude–it’s a little bit like a doctor walking into a hospital thinking that their goal for the day is to make money.”

“Instead, the goal is to understand the problem you’re studying. To be successful, you need to have an internal drive to really understand what is going on, play around with the problem, poke at it from different angles. Once you think you understand it, then it is time to write it up and share what you’ve learned. Ultimately, research is about satisfying your own curiosity.”