In early September, as the new semester began, Princeton’s Bendheim Center for Finance (Princeton BCF) hosted its 10th annual Princeton Initiative—an annual program that brings together 2nd-year Ph.D. students from around the world interested in writing their Ph.D. thesis at the intersection of macroeconomics and finance.

Organized by Stanford Professor Yuliy Sannikov and Princeton BCF Director Markus Brunnermeier, the Initiative aims to educate a new generation of scholars in an academic tradition rooted in the center’s founding. Princeton BCF was established in 1997 under the leadership of then Princeton Department of Economics Chair Ben Bernanke, whose work incorporating financial frictions in macroeconomic models continues to shape the field today.

Throughout the program, students attended lectures by Brunnermeier and Sannikov, as well as Atif Mian, Nobuhiro Kiyotaki, Chris Sims, Natalie Cox, and Jonathan Payne. They also broke out into small groups to complete problem sets and were able to network using a new online platform called YoTribe. 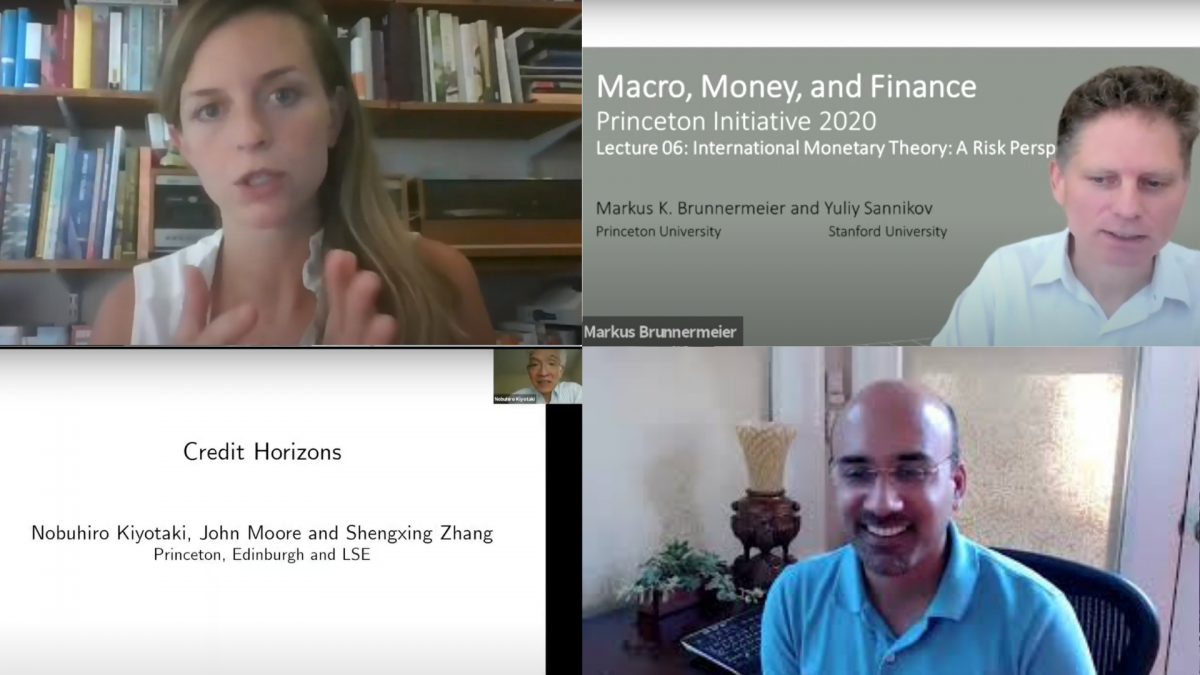 Four days of virtual lectures, available for anyone around the world

“Typically, one of my favorite parts of the Initiative is our ability to bring so many students from around the world together on campus at Princeton,” said Brunnermeier. “But that said, we knew from the beginning that we wouldn’t let the pandemic keep us from finding news ways to provide these same opportunities for students.”

“But that said, we knew from the beginning that we wouldn’t let the pandemic keep us from finding news ways to provide these same opportunities for students.”

While online learning of the scale happening today is new to universities nationwide, Princeton BCF has long sought to make certain educational resources available for free to students around the globe. A YouTube video series produced by Brunnermeier on “Money and Banking” has been viewed by nearly 20,000 students. This past spring, nearly 200,000 viewers from around the world joined the center for its lecture series on the economic impacts of COVID-19. The series featured several Nobel prize winners and dozens of top economists across several fields.

“Yes, online learning requires innovation and adaptation, but it’s worth it if it means more students can learn and benefit from the programming,” said Brunnermeier.

Videos and lectures from the 2020 Princeton Initiative

In the end, nearly 100 students attended the Initiative’s four days of academic programming and networking. For those who weren’t able to attend, nine video lectures by Chris Sims, Nobuhiro Kiyotaki, and more are available on the Princeton BCF YouTube channel.

The 2020 program began with two days of pre-meetings, including an introduction to macrofinance by Professor Brunnermeier that’s part of a Ph.D. class on financial and monetary economics he’ll be teaching this fall. All Princeton Initiative participants were invited to continue attending the class for the rest of the semester.

“I just wanted to say a massive thank you for organizing this initiative,” one student wrote of his participation in the program. “I really think these models are very elegant and tractable, and have hugely appreciated both the material from you guys and the incredibly interesting speakers throughout.”

To learn more about the Princeton Initiative and see video and lectures from past years, visit the program’s website.