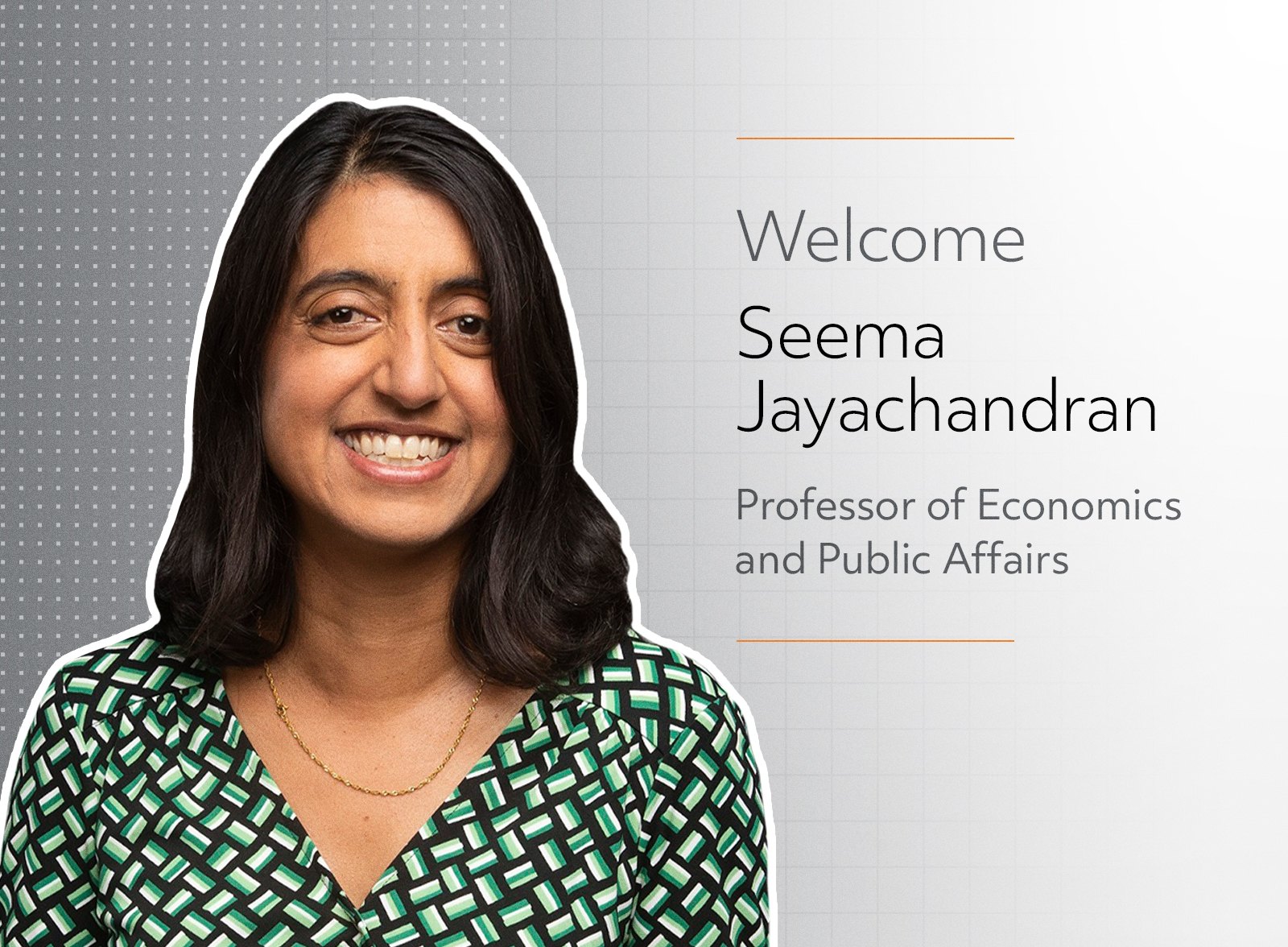 Even if you haven’t met Professor Seema Jayachandran in person, you probably know her by name.

In addition to being a widely-published development economist, Jayachandran serves on the Board of Directors for the Abdul Latif Jameel Poverty Action Lab (J-PAL), is co-director of the National Bureau of Economic Research’s program in Development Economics, and is a co-editor of the American Economic Journal: Applied Economics. At the very least, you’ve probably seen her byline in the New York Times, where she often shares important insights from economic research with readers outside academia.

Before the fall semester begins and we have the opportunity to see her on campus, we caught up with Professor Jayachandran to learn more about her research, her academic journey, and what she’s looking forward to as she joins us in the Garden State.

Q: Professor Jayachandran, welcome to Princeton! You’re coming from Northwestern University, and obviously Chicago is a great city. What about life in Princeton are you most looking forward to?

A: I’ve been setting up my new home and appreciating one benefit of Princeton over Chicago, which is that it’s much easier to run errands here! I grew up in a town that’s closer in size to Princeton than Chicago, so there’s something familiar and nice about being in a smaller community. I’m looking forward to the change after living in cities for the past 25 years. I’m sure I’ll miss things about urban life, but luckily New York and Philly are nearby.

Q: Before beginning your Ph.D. in economics, you studied physics at both the undergraduate and graduate levels. What made you decide to pursue economics as a career instead?

A: I was planning to be a theoretical physicist, but I realized early in my PhD that I didn’t enjoy doing physics research nearly as much as I’d enjoyed taking physics classes. I was still sold on a career as a professor, but I wanted to study questions that were less abstract and, importantly, I wanted the research process to engage a broader set of my skills and interests. Economics seemed to fit the bill. When I switched into the economics PhD program, almost immediately, I could tell it was a great fit.

Q: Most of your research is in development economics, especially environmental conservation, gender equality, and health in developing countries. What inspires you to work on these issues?

A: With both environmental conservation and gender equality, their relationship with economic development is complicated. Sometimes economic progress advances the goals of protecting the planet and promoting gender equality, but other times, there is a tension. That complexity makes it intellectually exciting to study and means there’s a need for smart policy, as a laissez-faire approach isn’t going to work. I also care a lot about those goals – my hope is that, by working on them, I can contribute a bit to achieving them.

Q: Looking at the field of development economics, what do you think are some of the most exciting, recent developments?

A: Randomized controlled trials (RCTs) came on the scene in development economics about 20 years ago and they have had an enormous influence on the field (though there is also a lot of amazing work being done with other methods). It’s been exciting to see progress in how people are designing RCTs and to see their policy impact. There has been a scale-up of interventions shown to work well and a re-think of interventions where the evidence suggests they are not as successful as people had hoped. I’m also blown away by some of the intricate RCTs that people are now designing to test between theories and pinpoint why an intervention did or did not achieve its goals.

Q: We love to hear from our faculty about work from others that they admire or respect. For students that might be interested in studying development economics–at either the graduate or undergraduate level–what books or papers do you recommend as early reading?

A: One of my favorite recent papers is “General Equilibrium Effects of Cash Transfers: Experimental Evidence from Kenya,” by Egger et al., which studies how giving families cash grants affects not just their well-being but the local economy. It’s a great example of how, with a well-designed randomized experiment, you can both answer a question of immediate policy relevance and illuminate how the economy works. Another paper in that vein is “Peer Effects, Teacher Incentives, and the Impact of Tracking: Evidence from a Randomized Evaluation in Kenya” by Esther Duflo, Michael Kremer, and our soon-to-be-colleague Pascaline Dupas. I also recommend Poor Economics by Abhijit Banerjee and Esther Duflo, which is a great, easy-to-read entry point into development economics.

Q: Final question for any Princeton students reading this: What will you be teaching this year or next?

A: I’ll be teaching development economics to PhD students and an MPA class on Economic Analysis of Development. I’m looking forward to teaching both the PhD and MPA students, and getting to interact with undergraduates outside the classroom.