Sixteen Scientists, Economists, and Climate Experts on How to Reach Net-Zero by 2050 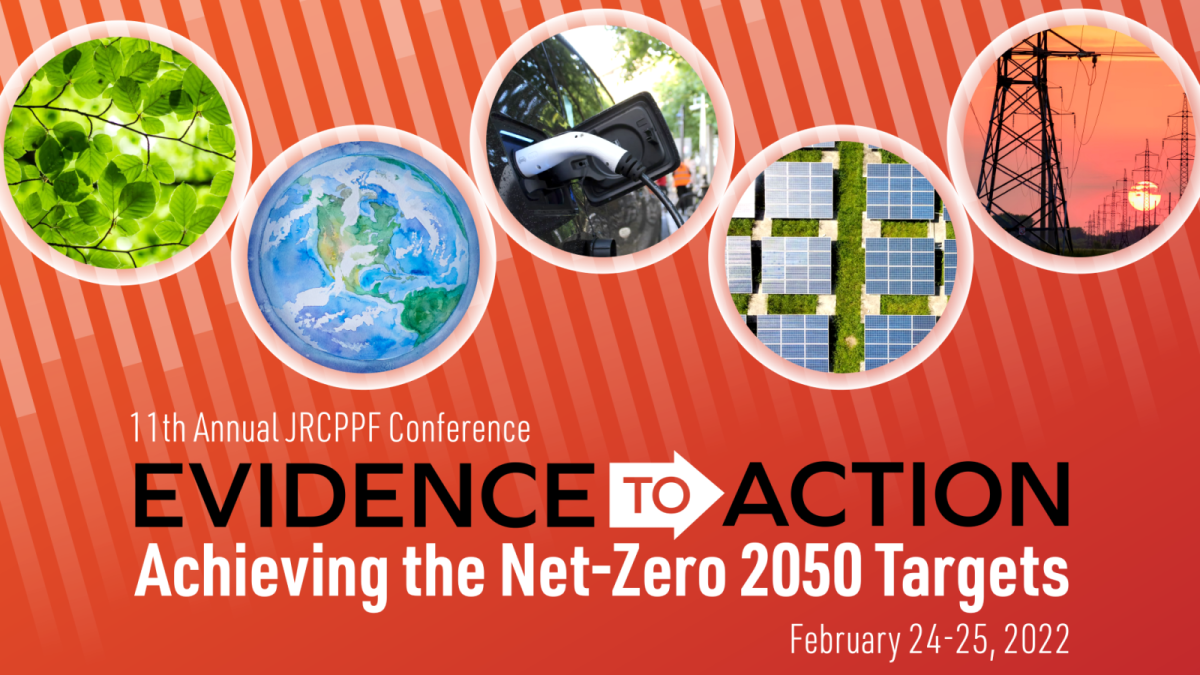 Editor’s note: This piece was originally published by the Julis-Rabinowitz Center for Public Policy and Finance.

Every year, the Julis-Rabinowitz Center for Public Policy and Finance organizes a two-day conference that brings together experts from academia, government, and industry to discuss multidisciplinary solutions to issues of global concern. This year’s conference, Evidence to Action: Achieving the Net-Zero 2050 Targets, took an in-depth look at the sweeping transformations in technology, markets, and politics needed to reach carbon neutrality.

The 2015 Paris Agreement called on the world to constrain global warming to 2 degrees Celsius or less above pre-industrial levels–and preferably around 1.5 degrees Celsius–to reduce the risk of extreme weather and ecosystem failure. Since then, the target of net-zero emissions of greenhouse gasses by 2050 has emerged as the global benchmark for measuring success toward this goal.

In the first panel, Zelina Zaiton Ibrahim of the University of Putra–who along with panelist Kristie Ebi of the University of Washington contributed to the Intergovernmental Panel on Climate Change’s (IPCC) most recent report–explained the science behind the goal of net-zero emissions by 2050.

In her presentation, Ibrahim illustrated that global temperatures over the last ten years have averaged 1.09 degrees Celsius above pre-industrial levels and that a scenario of “very low” carbon emissions is “the only scenario consistent with meeting the Paris agreement target of 1.5 degrees Centigrade.”

“Unless there are immediate, rapid, and large-scale reductions in the GHG [greenhouse gas-emitting] nations, we will have very strong concerns about being able to limit warming to 1.5 degrees Celsius,” she said.

But just how quickly must we reduce carbon dioxide emissions to restrain the global increase in temperature to below 2 degrees? Detlef Van Vuuren of Utrecht University presented evidence that emissions would have to reach net-zero between 2060 and 2080 in order to meet the 2-degree limit. To limit temperatures to the preferred 1.5 degrees, emissions would have to hit net-zero even earlier–between 2035 and 2060. 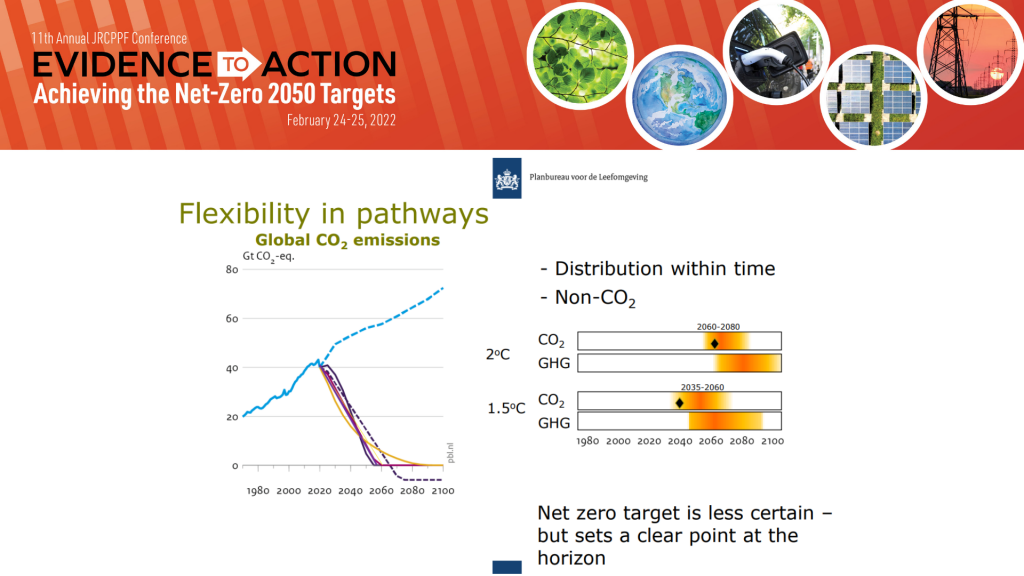 What if there is no concerted action? If we continue current emissions trends, Van Vuuren noted, global temperature increases will be between 3 and 5 degrees Celsius above pre-industrial levels by the year 2100, an outcome with dire implications for our world.

Global investment to fight climate change is rising–but too slowly

In keynote remarks on the first day of the conference, Barbara Buchner, Global Managing Director of the Climate Policy Initiative, said that although financing for climate change mitigation is increasing, much more investment will be needed to limit global warming to 1.5 degrees Celsius.

The Climate Policy Initiative tracks climate finance flows and documented a 10% increase in annual average financing in 2019 and 2020, a rate of growth that,  Buchner noted, is markedly slower than previous periods. 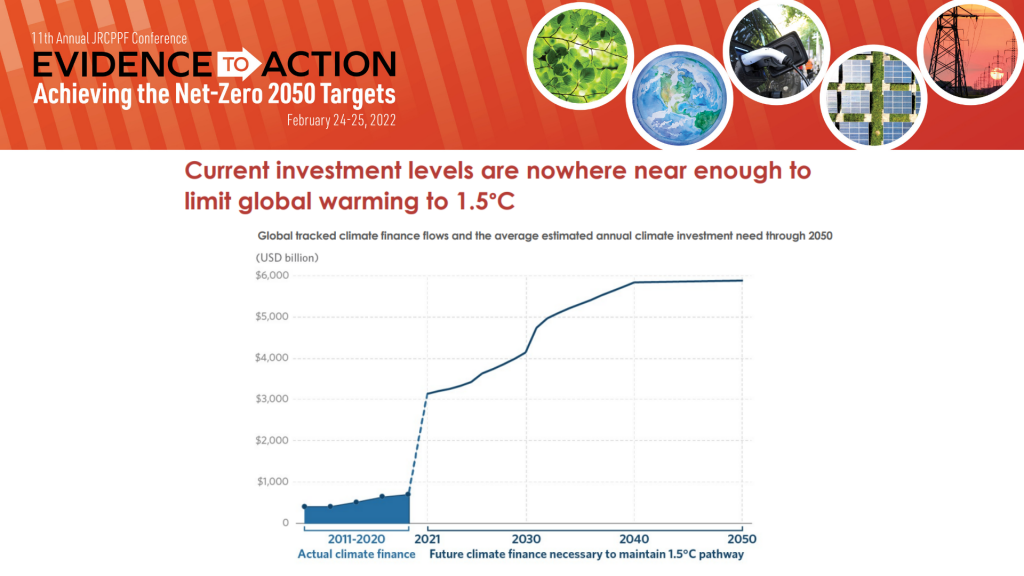 “It’s clear that incremental increases in climate finance will not be sufficient. Public and private finance must increase decisively and should count in trillions, not in billions, as it is at the moment,”  she said.

“The money is there….When you look at conventional, non-climate finance investment, you know that trillions are already spent on carbon-intensive products and sectors, from fossil fuel energy to combustion engine-like vehicles to new buildings that are still high-energy intensive.”

Good government policy can transform the private sector to crowd in private finance and close the investment gap, Buchner said, calling for policies that effectively price carbon and eliminate fossil fuel subsidies, as well as “green procurement and budgeting policies that leverage government’s considerable power as a consumer.”

“Policies alone are not enough,” Buchner concluded. “In order to expand our climate capabilities at the scale required, we must mainstream sustainability at all levels of our organizations.”

“If we proceed with the status quo,” Buchner concluded, “…we will face catastrophic consequences, both economically but also, in humanitarian and environmental terms. The window is not yet closed on reaching our goals, and if we ramp up our sustainability efforts, it will not only diminish harm but could create significantly more economic and social benefits.”

The path to net-zero will change our infrastructure, lifestyles, and institutions

“The path we take in terms of emissions reductions over time to get to net-zero is equally as important as when we reach net-zero,” said Ilissa Ocko, who earned her Ph.D. at Princeton in 2013 and is now a Senior Climate Scientist at the Environmental Defense Fund.

Ocko highlighted the consequences of taking action to reduce emissions earlier vs. later. In both scenarios, we meet the net-zero 2050 target, but because what matters is the build-up of GHGs in the atmosphere, delayed action will lead to worse climate outcomes. “The net-zero goal is a useful milestone, but not a guarantee of climate success nor an indication of failure,” she said. 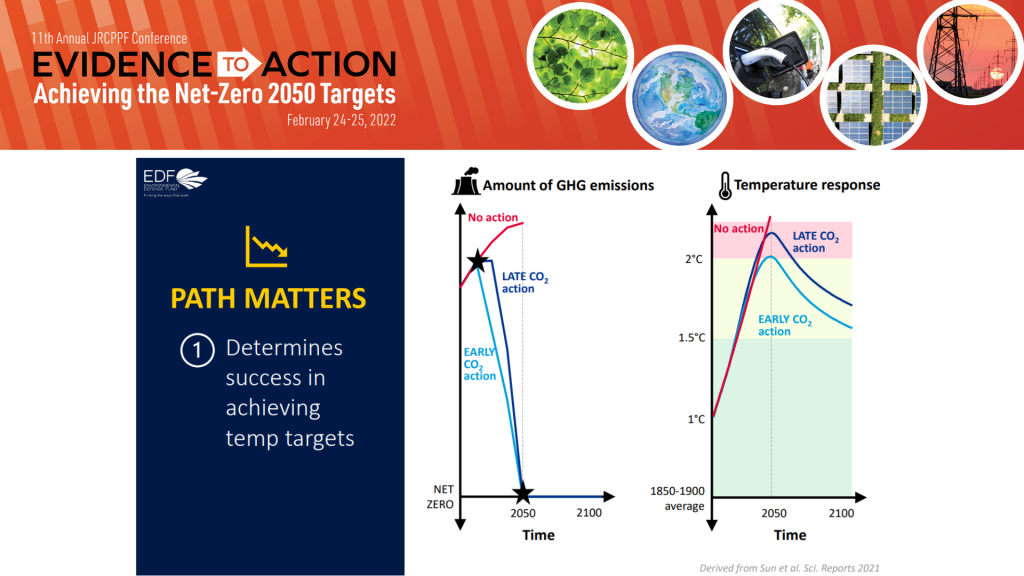 Jesse Jenkins, Assistant Professor of Mechanical and Aerospace Engineering in the Andlinger Center for Energy and the Environment at Princeton, said the net-zero transition will require addressing three key challenges. First, a “rapid and sustained deployment of physical infrastructure at a pace we haven’t seen in generations.” By 2050, for example, we’d need to triple U.S. electricity transmission capacity, he said, noting it took us 150 years to build our current grid.

Finally, we need to transform America’s energy workforce. “All of our scenarios lead to net job increases in the energy supply-related sectors,” Jenkins said. “However, this overall positive employment story masks significant regional and sectoral dislocations that need to be proactively managed.”

Professor Jessika Trancik of MIT and Gunnar Luderer of the Potsdam Institute for Climate Impact Research spoke about the challenges of decarbonizing certain industries and noted that new technologies are required.

“Some of the technological advancements needed include low-emissions but energy-dense fuels, technologies to deal with solar and wind variability including long-duration energy storage, demand management, and transmission expansion, carbon-free nonvariable generation, some amount of post-combustion carbon clean-up, leak prediction, and detection and prevention of methane emissions.” 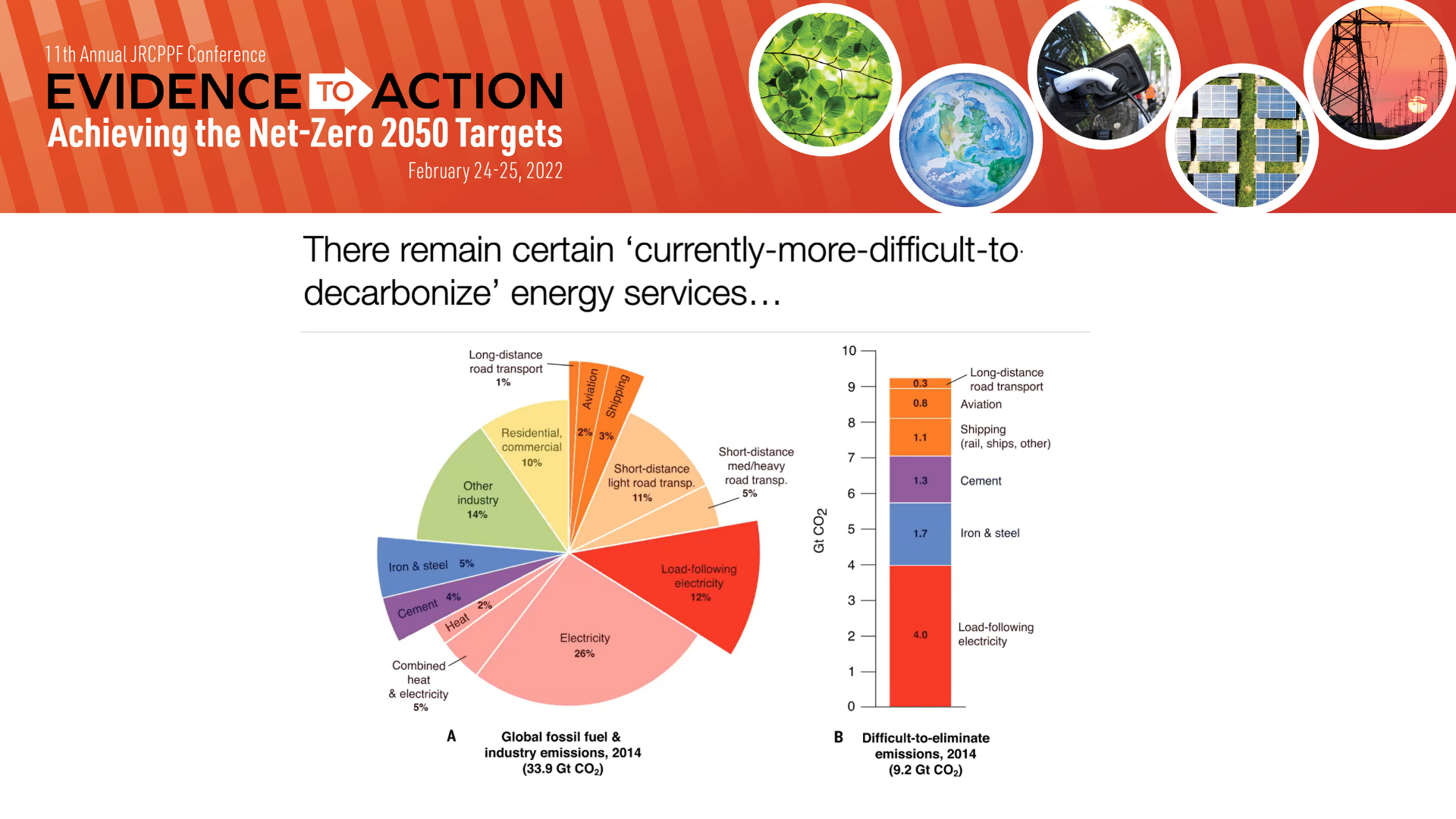 Luderer concluded, “We have to not only understand the suitable pathways for reaching net-zero, but also what policy instruments can bring about those changes, especially in sectors that are harder to carbonize, like transport, international transport, aviation, shipping, but then also very importantly the material industries.”

Changing behavior and attitudes will take planning and coordination across sectors

Connie Hedegaard, the former European Commissioner for Climate Action, joined the conference to discuss the need for demand-side incentives and policies to achieve “large-scale and lasting change.”

“It’s not just enough to talk about, for instance, a price on CO2,” Hedegaard said. “[While] that’s very important, in order to keep the social balance, we need to think about how to green our taxation systems.” Hedegaard said the market alone will not “get us where we need to be within the timeframe we have.”

“That is why we need politics and planning and coordination to a degree that we have not been used to.”

Sarah Kapnick, a member of Princeton’s Class of 2004, provided background on actions in the corporate sector toward reaching net-zero. Kapnick is the Managing Director and Senior Climate Scientist & Sustainability Strategist with JP Morgan Chase & Co.

Kapnick talked about an alliance of 450 financial institutions across 45 countries, formed by Michael Bloomberg and Mark Carney (UN Special Envoy on Climate Action and Finance) to create a net-zero goal and align financing and actions.

“All of this was under the premise that private investments need to provide more than two-thirds of all the financing required for decarbonization. Without mobilization of private dollars, decarbonization will not happen through public sector investment alone.”

Adding to the discussion of demand-side climate solutions, Felix Creutzig of Technical University Berlin, said his review of 700 studies on the potential for climate mitigation revealed that 40-50% of greenhouse gas emissions reductions can, by 2050, be addressed by demand-side interventions.

Creutzig pointed to the large potential on the demand side to make services more efficient, and to the importance of social movements in shifting policies. He also noted that middle-level actors like urban and transportation planners can play a central role.

In his keynote on the second day of the conference, Patrick Bolton of Columbia Business School argued that climate change is a risk management problem and discussed the rise of the Environmental, Social, and Corporate Governance (ESG) movement.

“Market economies are not designed to protect the climate and the planet…economics has often failed to recognize this basic problem.”

However, Bolton said the ESG movement, which started 20 years ago and aims to encourage investment in, among other things, green companies and products, doesn’t hold as much promise for reaching net-zero as many hope.

Bolton noted that ESG investment has grown from a niche movement 20 years ago to currently representing $130 trillion of assets under management or about 40% of global financial assets. “In a mature market with 40% of financial assets pursuing some form of ESG  strategy, it’s no longer possible for ESG strategies to…allow investors to do well by doing good,” he said.

He also noted that despite the large volume of assets under management claiming to have an ESG tilt, “there’s little evidence that shareholder engagement has had a significant impact in curbing corporate carbon emissions.”

Bolton called on the industry to think systematically about climate-related financial risks and align their balance sheets and portfolios with net-zero targets. The role of central banks, he said, is to provide guidance and supervision on how to reduce systemic risk from climate change and generate forward-looking scenarios that help financial institutions structure risk management.

In the final panel on the role of markets in reaching net-zero, Christian Gollier of the Toulouse School of Economics talked about the “power of the price signal” and emphasized the efficiency of pricing carbon as a tool for managing emissions.

“Carbon pricing, with no exemption [and if] uniform, is a simple mechanism that’s lobby-proof,” Gollier said. He also noted that placing a price on carbon has been shown to be effective and more efficient than other instruments. “Putting a value on carbon is critically important to make cost-benefit analysis, even if you decline the idea that we need to impose a carbon price signal to everybody.”

Mar Reguant of Northwestern University argued that politics and market imperfections, for example in monitoring, can limit the effectiveness of a carbon price. Applying a universal pricing scheme to all sectors may not be efficient and it might be more beneficial, for example, to differentiate across market segments, she said. Reguant also noted that not all countries or states may choose to participate in carbon markets, making some of the most effective policies politically infeasible. 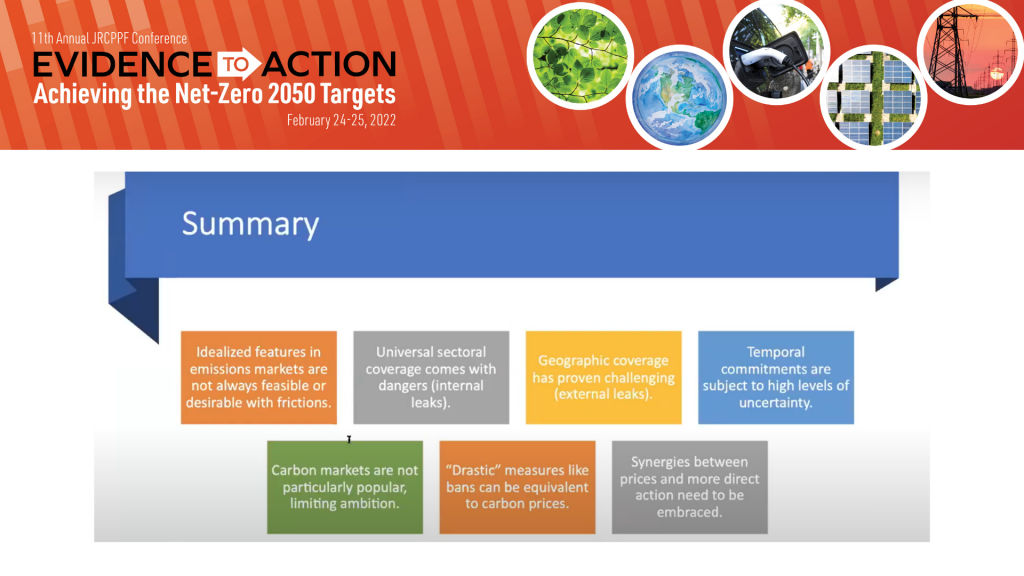 Finally, Gernot Wagner of New York University said that while pricing works, setting the right or optimal price is a challenge.

“There are lots of reasons to believe that there is no single price that is the right one,” he said. “Timing matters. Context matters. Politics matters.”

Given the urgency to act, we have to take a flexible approach, he argued, and “be ready with the kind of policy proposals that fit, can adjust to work in whichever political context one can imagine.”

The costs of not acting are high

Throughout the conference, the panelists emphasized the enormity of the task before us, and the transformational changes required to reach net-zero by 2050. But they were also adamant that the work has to be done now, and the costs of not acting or delaying will be far worse.

Professor Kristie Ebi of the University of Washington discussed the extent to which climate change is influencing particular health outcomes from particular events and highlighted research showing that 37% of heat-related deaths in recent decades, across dozens of countries, can be attributed to climate change.

She also noted the unequal distribution of climate change’s effects. “When we look at the health risk of a changing climate, the estimate is that 85% of those risks are in children.”

To learn more about the Evidence to Action conference and watch full video presentations from all sixteen panelists and speakers, visit the conference website.