Dividend Taxes and the Allocation of Capital

When President Bush adopted the Jobs and Growth Tax Relief Reconciliation Act of 2003, reducing the top federal tax rate on individual dividends from 38.6 percent to 15 percent, he claimed that the tax cut would provide “near-term support to investment” and “capital to build factories, to buy equipment, hire more people.” [i]

By contrast, left-wing politicians often claim that the amount paid to shareholders is too high and that this money could be used more productively to invest and pay workers. Writing in the New York Times in 2019, Senators Sanders and Schumer wrote that “when corporations direct resources [to payouts], they restrain their capacity to reinvest profits more meaningfully in the company in terms of R&D, equipment, higher wages.” [ii]

At the heart of this debate is the question of how an increase in payout taxes affects firm behaviors, something we know surprisingly little about from academic research.

In a recent working paper (PDF), we contribute to the debate by studying one of the largest single increases in the dividend tax rate in any developed country. Looking at the effects of a steep dividend tax increase in France, we find that entrepreneurs affected by the tax increase substantially reduced dividend payouts, implying that they had more liquidity in hand. 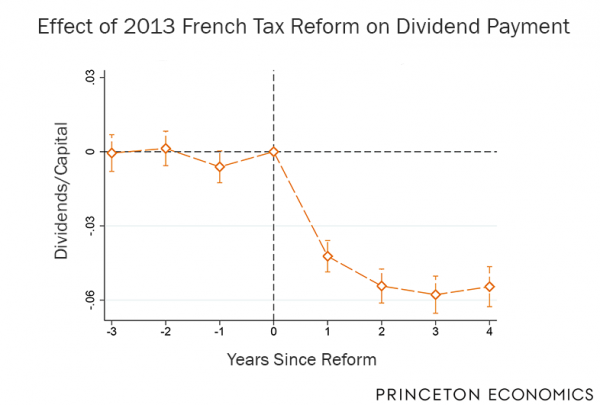 What did they do with this extra liquidity? We find that for every additional dollar of unpaid dividends, they increased their investment by 0.2 dollars. The increase in investment was even larger when they faced higher investment opportunities. 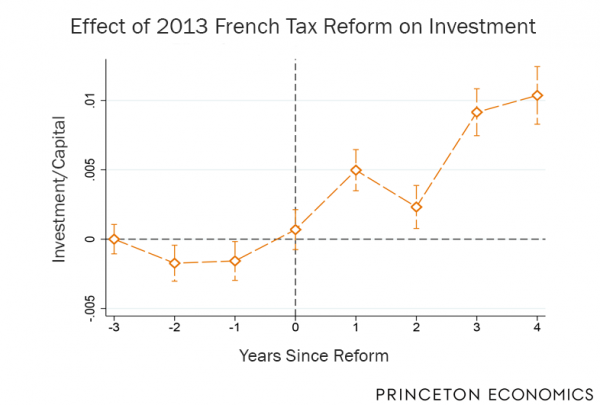 By increasing the dividend tax rate, France reduced a distortion in how the government taxes capital vs. labor income of certain business owners. This led entrepreneurs who were exposed to the tax to substantially increase their investment when investment opportunities increased. Understanding why this occurred is a major subject of our paper.

Following its electoral victory, the French center-left party decided in 2013 to raise the dividend tax rate for entrepreneurs, explaining that: “it is fair and legitimate to reward patient and productive investment (…) We want to incentivize investment rather than dividend payouts.”[iii]

The reform led to an almost threefold increase in the dividend tax rate, from 15.5 percent to 46 percent. Ultimately, the increase affected 75 percent of all French firms.

Our period of study was 2008–2016. All firms in our sample pay an entity-level tax, and as such are similar to a U.S. “C–corp.” In France, pass–through entities are only found among the youngest and smallest firms and mostly limited to self–employed individuals. Such firms are excluded from our sample as they report only limited items in their balance sheet and because we focus on firms with at least one employee.

Firms that existed before the reform swiftly reduced their dividends the year of the reform and kept them constantly lower afterwards. This increase in liquidity at hand was then allocated in the following way for the average firm:

The fact that both investment and credit to customers increased after the tax hike can explain why firms facing the tax increase experience a faster growth of their sales and the value-added produced. The increase in corporate saving also led to a decline in the likelihood for the firm to go bankrupt, but barely affected hiring and employee compensation.

Unlike what proponents of the reform feared, we cannot detect any change in higher tax evasion behaviors.

Did the reform lead to any inefficiencies?

While the tax increase led to an increase in investment for the average French firm, the reform might still have produced reallocation of capital by increasing financing constraints of some firms. In particular, some economic theories predict that higher dividend tax rates would reduce investment for firms that are equity dependent, as these firms have to issue new equity to finance their investment. The cash flow generated by the new investments are then used to pay back the new shareholders with dividends. Therefore, any increase in the dividend tax rate will increase the returns asked by potential shareholders.

The richness of our data allows us to give every chance to this theory by zooming in on sub-groups of entrepreneurs who should be more likely to be equity dependent. In all cases, we fail to find a group that had to reduce its investment. This result is important as it casts important doubt about arguments in favor of decreasing dividend tax rate to foster economic growth.

Implications for understanding the behaviors of entrepreneurs

Overall, our results suggest that entrepreneurs in equilibrium are financially constrained because they pay too much dividends, leaving them with not enough cash in their balance sheet when investment opportunities appear. This might suggest that, unlike the conventional wisdom in most economic models where agents are on average right in their foresights, entrepreneurs have a hard time predicting their future investment needs and may sacrifice long term development for the short term.

[iii] Francois Rebsamen in 2012, French senator and one of the most prominent figures of the“Parti Socialiste” (the left–wing party in power).