The Impact of the 2018 Tariffs on Prices and Welfare

The paper is now published in the Journal of Economic Perspectives

Editor’s Note: This summary was originally posted by the Center for Economic Performance at the London School of Economics. The full paper is available for download in the Fall 2019 Journal of Economic Perspectives.

Over the course of 2018, the Trump administration imposed import tariffs on approximately $283 billion of U.S. imports, with rates ranging between 10 percent and 50 percent. In response, U.S. trading partners, especially China, retaliated with tariffs averaging 16 percent on approximately $121 billion of U.S. exports, plunging the United States into its first episode of large-scale reciprocal tariff protection since the Great Depression of the 1930s.

This type of behaviour is commonly referred to as a ‘trade war’—and it raises questions about the future path of international trade integration. For the classic review of the prior history of US trade policy, see Irwin (2017).

In a new study (PDF), we explore the effects of this change in U.S. trade policy on prices and welfare. As the figure below shows, the 2018 U.S. tariffs were introduced in six main waves, starting in January (wave 1) and ending in September (wave 6). The early waves of tariffs on solar panels, washing machines, and steel and aluminium (waves 1-3) were dwarfed by the tariffs applied to Chinese imports over the summer (waves 4-6). In total, nearly $283 billion of imports—about 12% of total imports—were hit by duties. 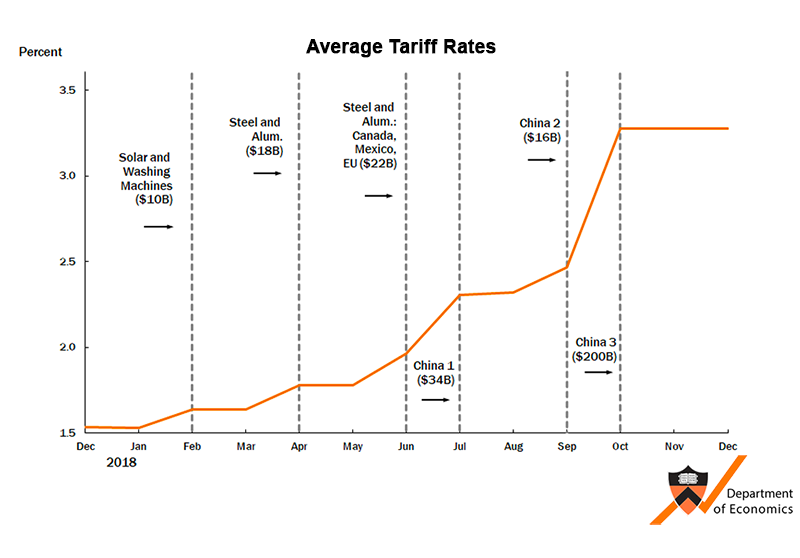 We start by using U.S. customs data to examine the extent to which these tariffs were borne by U.S. importers versus foreign exporters. These data report the values and quantities of imports by source country at the 10-digit level of harmonised tariff system (HTS10 data) for around 16,000 narrowly defined categories.

Dividing the import values by the quantities, we compute unit values at a very disaggregated level (for example, ‘baseball and softball gloves and mitts made in China’). Importantly, unit values are computed before tariffs are applied, so they correspond to foreign export prices. Therefore, if we multiply these unit values by the duty rates available from the U.S. International Trade Commission (ITC), we can compute tariff-inclusive import prices.

These tariff-inclusive prices provide the first hint of what has been happening to the U.S. economy as a result of the Trump administration’s tariffs. We compute the relative change in tariff-inclusive prices for each country and product included in each tariff wave and for the untreated group of countries and products. We construct import price indices that aggregate across the countries and products included in each group using import expenditure shares as weights.

The figure below plots the evolution of these import price indices for each group and exhibits a number of important properties. First, the prices for sectors not subject to tariffs are fairly flat, which suggests that whatever price movements we observe in protected sectors are likely to be due to the tariffs. 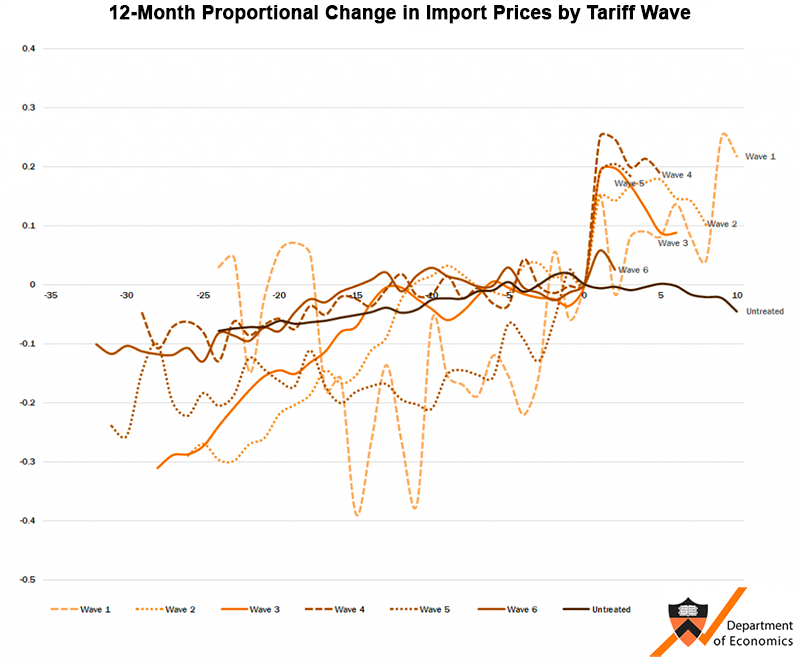 Therefore, although in principle the effect of higher tariffs on domestic prices could be offset by foreign exporters lowering their pre-tariff prices, we find little evidence of such an improvement in the terms of trade up to now. This implies that the full incidence of the tariffs has fallen on domestic consumers so far.

The third figure below repeats the same plot using the total value of imports as the variable in place of unit values. In this plot, we normalise the import value in month zero to be one for all goods, so that the import values are all relative to imports in the last month before the tariffs were applied. 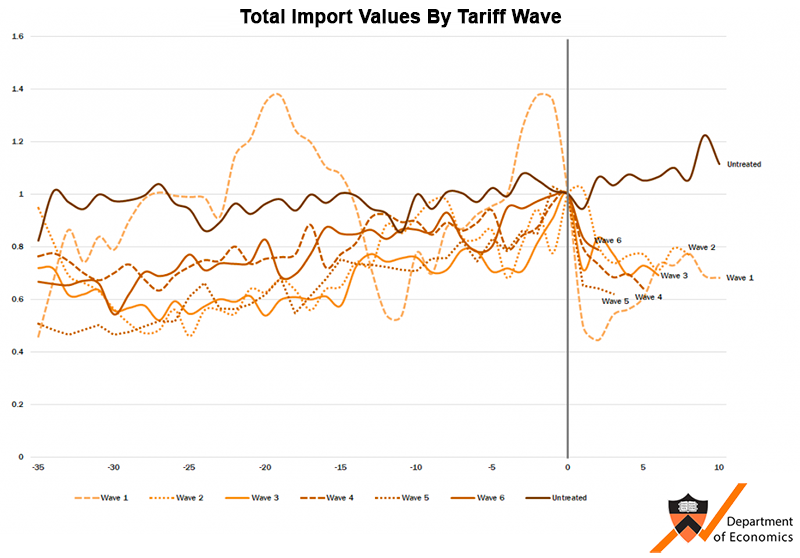 We see import values falling by 25- 30 percent after the imposition of the tariffs, implying that the imposition of the tariffs had very large relative effects on the amount of imports for affected countries and sectors. Regressing the changes in imports on the changes in tariffs, we find that the imports of the affected sectors fell by $136 billion more than the unaffected.

This estimate implies a substantial shock to global supply chains, because it means that at least $136 billion of trade was redirected as a result of the import tariffs. Given the fixed costs associated with the current supply chains, this reorganisation of global value chains is likely to impose large costs on firms that have made investments in the United States and China, as they have to move their facilities to other locations or find alternative sources of import and export destinations.

We argue that conventional trade models provide a powerful framework for understanding the effects of the tariffs on prices, quantities and welfare. The impacts of the tariffs have been largely in line with what one might have predicted based on a simple supply and demand framework.

In addition to these conventional effects on prices and quantities, we also find that the tariffs have reduced import varieties, where we define a variety as a country HTS10 code (for example, French red wine). If the products produced in one country are imperfect substitutes for those produced in other countries, this reduction in import variety also reduces welfare.

Additionally, tariffs have changed the pricing behaviour of U.S. producers by protecting them from foreign competition and enabling them to raise prices and mark-ups. If we assume that the 2018 tariffs have not affected prices in sectors that do not use or compete with targeted imports, we estimate that the combined effect of input and output tariffs have raised the average price of U.S. manufacturing by around one percentage point.

Of course, these numbers do not take account of the impact on U.S. exporters. Foreign countries have placed retaliatory tariffs on approximately $121 billion of U.S. exports. We find similar effects on both tariff-inclusive prices and trade values for those foreign countries that have retaliated against the United States. This indicates that the trade war also reduces real income for foreign countries and for the global economy as a whole.

Once again, to the extent that this means that U.S. firms have to find new export markets or to offshore to avoid paying the tariffs, it is likely that the retaliatory tariffs are associated with substantial shifts in supply chains and possibly large depreciations in capital equipment based in the United States.

Summing together our estimates for lost exports and imports, we find that by November 2018, approximately $13.8 billion of trade ($2.4 billion of exports and $11.4 billion of imports) per month was being redirected as a result of the tariffs, which amounts to $165 billion on an annual basis.

While these estimates are in themselves concerning, they may omit other potentially large costs such as policy uncertainty, as emphasised by Handley and Limão (2017) and Pierce and Schott (2016). While these effects of greater trade policy uncertainty are beyond the scope of our study, they are likely to be considerable. They may be reflected in the substantial falls in U.S. and Chinese equity markets around the time of some of the most important trade policy.