This paper is now published in the Journal of Political Economy.

Using Argentina’s integration into the world economy in the late-19th century as a natural experiment, the authors provide new theory and evidence on how international trade promotes structural transformation and economic development.

Ultimately, the authors introduce the idea of a spatial Balassa-Samuelson effect as a key feature of economic development. They show that locations closer to world markets have higher population densities, urban population shares, relative prices of non-traded goods, and land prices relative to wages. These areas also specialize in the most trade-cost-sensitive traded goods.

In addition to having higher overall levels of economic activity, locations closer to world markets also experience structural transformation, both between the traded and non-traded sectors, and also across goods within the traded sector.

Background on Argentina in the late 19th-century

The area that makes up present-day Argentina was first settled by Europeans in the early-sixteenth century. During the period of Spanish colonial rule, economic activity was centered around the silver mines in neighboring Bolivia, with the first opening of direct trade occurring in 1810 after a local junta won political power in Buenos Aires.

In 1880, the election of Julio Roca to the presidency was accompanied by a pursuit of liberal policies toward international flows of trade, capital, and migrants. At the same time, a series of technological improvements centered on steam power dramatically reduced international transport costs.

Following improvements in the speed, reliability and capacity of steam ships, international freight rates across the North Atlantic fell drastically from 1840-1914, as reflected in a substantial improvement in Argentina’s terms of trade. 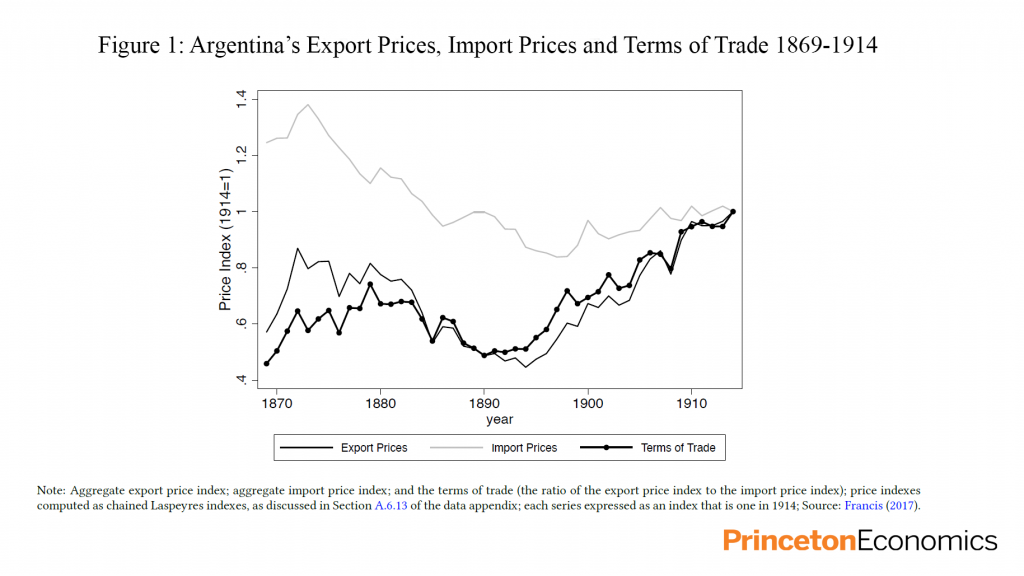 Steam technology also revolutionized domestic transportation through the construction of railroads. The first railroad constructed in Argentina was the Buenos Aires Western Railroad in 1857. By 1914, the railroad network had grown to around 30,000 kilometers.

With these reductions in international and domestic transport costs, Argentina experienced one of the largest recorded booms in international trade. Between 1869 and 1914, Argentina’s real exports and imports increased by more than 500 and 200 percent, respectively.

Using a newly-constructed and spatially-disaggregated dataset for Argentina from 1869-1914, the authors use large-scale variation in external integration (from reductions in transatlantic freight rates) and internal integration (from the construction of the railroad network) in their empirical setting to provide reduced-form evidence of the spatial Balassa-Samuelson effect.

They then provide microeconomic foundations for the effect by developing a novel theoretical model of the spatial distribution of economic activity across sectors and locations. They estimate the model’s parameters and find parameter estimates that are in line with central values in the existing empirical literature. They also use their estimated model to undertake counterfactuals for the impact of external integration (reductions in transatlantic freight rates), internal integration (the construction of the railroad network) and both external and internal integration.

In counterfactuals using the estimated model, the authors find that reductions in transatlantic freight rates raised Argentina’s GDP by 17.7%, resulted in population growth of 13.8%, and increased welfare by 7.1%.

By comparison, the construction of the railroad network raised GDP by 12.8%, resulted in population growth of 9.4%, and increased welfare by 4.8%.

The authors also show that the construction of the railroad network raised the net present value of land income by more than its construction costs and that external integration magnified this impact on land values.

Although the authors focus on 19th-century Argentina because it provides an attractive empirical setting, the spatial Balassa-Samuelson effect is relevant for other settings. In many developing countries today, areas close to large ports have high population density, high shares of employment in the non-traded sector, high land rents relative to wages, and high relative prices of non-traded goods, consistent with the spatial Balassa-Samuelson effect.